Dr. Airport or: How I learned to Stop Worrying and Love the Terminal

Growing up, I always got the feeling that airports were not held in high regard. My parents always seem to hold disdain over the long flight cues, the crowded gates, and the general hustle and bustle of airports (of course, travelling with 3 kids I’m sure can be a bit of a nightmare).

However, in my experience Airports have always been a bit of a magical place. A sort of limbo in between destinations that conveniently offers free Wi-Fi, an array of shopping options, and interesting art installations. A place where you can have a morning coffee at 6am next to a gentlemen who’s having his ‘11pm’ nightcap.

Airports seem to really find a place in my heart especially when I’m forced to spend a night in one. There’s something about an empty airport that just feels…cool. You’re walking around this large expansive space designed to shuttle up to 30 million people per day and there’s nobody but you and the glistening tiles beneath your feet. The shops are closed, the workers that are around seem akin to you, as if you’re a part of the brotherhood that is the night-shift of the airport, and it’s just so vast that when empty it seems all for you. 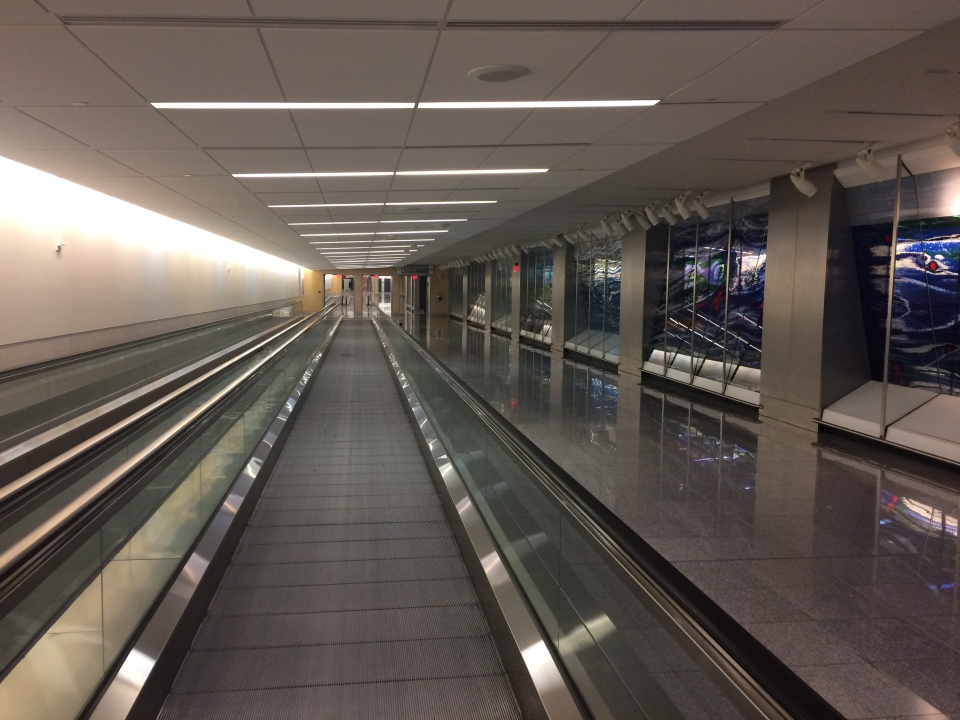 Typically, I’ve found there is always a gem in terms of sleeping opportunities. At Atlanta’s Hartsfield-Jackson I was determined to find that said spot. Considering this airport pumps through more traffic in a year than any airport ON EARTH, it’s a pretty big place. I asked the gentlemen working the service desk the question directly, and he knew exactly what I was after. He stated, “Terminal F, lots of couches with plugs nearby”, a man after my own heart. You mean I actually will get to sleep lying down? AND potentially throw on an episode of Narcos before dozing off? Almost feels like home.

I decided I would brave the walk since I’d been sitting cooped up in a plane for the last few hours and when I finally reached ‘Terminal F’ I could see I wasn’t the only one that knew about this dream spot. Couches were snatched up left and right, I saw my opportunity in the distance and my leisurely stroll of a pace quickly became a commendable speed-walking pace. I had secured myself two beautiful connected ‘big-chairs’, relatively flat, with a small ledge nearby for the laptop and a plug just above. In terms of airport sleeping spots, this is gold.

The spot dreams are made

Popping the headphones in and using my bag as a pillow (for comfort and security), I quickly dozed off to the subtle sounds of the airport PA system. Sleep doesn’t always come easily in an airport, but given enough time I think everyone can properly doze off. I set my alarm early enough that I wouldn’t be that crazy guy sleeping in the middle of a crowded airport. Getting up at 6am, I realize that as I awake, so does the airport. Shops begin to unroll their security gates, crowds funnel in through security, and in the span of only an hour or so there is a general bustle that I remember. Just like that, the airport has gone from my own personal dreamland, to the standard, timeline-driven place that it usually is. Perhaps in a year or so I’ll have another opportunity overnight.

Although I wouldn’t choose to sleep in an airport outright, I’m always appreciative of the odd opportunities I come across to do so. This time was no different!

← Everything You Need to Know About – Killarneys’ La Cloche Silhouette Trail
What’s in Your Backpack: Cole’s Antibiotics →