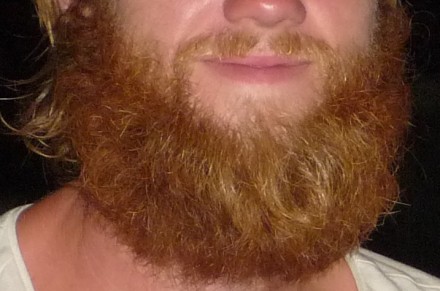 Being a fellow-ginger bearded man myself I’m quickly likened to any man, or men, that grow out the reddish-orange spectacle of facial hair that is a beard. Let’s begin with Luke (left). Luke’s auburn chin-tickler has been on & off since he was 16. I suppose once he realized that not only does facial hair hide the soft-skinned flesh of childhood insecurity, and create an image of man as man was intended to be, that there was no need to every really be clean-shaven again. While it certainly has is growth stints, Luke opts to give it a bit of a trim (hedge trimmers I’m assuming) when he makes the trek back to the UK to visit his mom. This little number is on month 5 and sees no signs of slowly down. Not only does Luke’s beard create an air of idyllic thought, and a look of constant intrigue, but it also sits on the face of one of the nicest guys you could have a conversation with.

And Tristan (right). While his pumpkin-coloured masterpiece deserves every ounce of respect, between being awestruck that the two of them sat side-by-side, and enjoying the company of a few other travellers I never had the chance to ask him anything about his beard. My only true reference to the nature of this man is that the first time I saw him he was rolling down the main strip of Kuta, Lombok with a low-seated chopper like motorcycle (which could be head about a kilometre away), beard pointed to the sky, and a lit cigarette in his mouth – a man after my own heart.

I had begun to realize that my Of Backpacks & Beards title was a little misleading, as I never really do write anything about beards, and opt to simply adore from afar. However, that all changed when these two bearded brothers decided to sit side-by-side across the table from myself. These men offer a true sentiment to ginger-beards everywhere, and just one glimpse of their facial deities is enough to let you see the true nature of your very soul. Keep em’ coming boys, cheers.

← Kuta Come Back For More?
Tuesdays Travel Tip (on Wednesday) – Learn the Lingo →

One Comment on “Scruff – A Little Ginger Goes A Long Way”