Kuta Come Back For More?

After spending a few more nights than anticipated in Padangbai we decided it was time to continue on, so we packed small daypacks, left out rucksacks in Padangbai and headed over the Pacific to Lombok. Now you have the option of either going with one of the tons of hecklers selling a speedboat trip between the islands, which takes roughly an hour and a half, or you have the option of taking the shuttle ferry, which takes about 5 hours. While the speedboat with 6 outboard 250hp engines seemed enticing, you can’t take you bike over with you, so we opted for the much cheaper ferry (speedboat is roughly 150-200,000rp, vs the 40,000rp/each fee for the ferry).

We boarded this massive vessel and headed straight for the top floor that was completely open to the harsh sunlight. The whole time we hadn’t really seen anyone else on the boat and assumed it was rather empty. However, after about an hour in the sunlight we sought shelter on the deck below and quickly realized that the bottom deck featured a complimentary sleeping room, café equipped with a small movie screen, comfy seats, a cafeteria, and air-conditioning blasting through the vents! It’s important to check out the mode of transport you’re taking before assuming that sweltering in the hot sun is your only option. After some microwaved Mie Goreng, a few games of Cribbage, and a snooze in the napping room we pulled into to Lembar after a 4-hour jaunt. 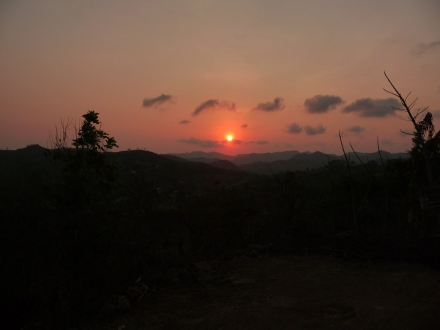 We decided to head straight for Kuta Beach, a place that is vastly different from its Balinese counterpart. White-sand beaches, rugged hills, open roads, and great surf characterize Lombok’s Kuta. If Kuta Beach, Bali is one of the worst places to stay in Indonesia, then Kuta Beach, Lombok might be one of the best. It took us about an hour on motorbike to reach the shores from Lembar, and it wasn’t difficult to find a guesthouse. 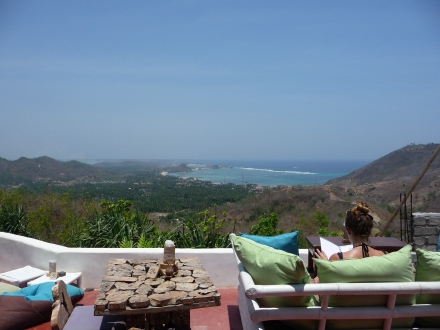 Due to the opening of an international airport nearby Kuta is slowly starting to cater largely to a developing tourism industry. As such, every third building is a guesthouse or homestay, and every second is a restaurant or bar. Luckily though, things are just in the first stages of upswing and the cool surf-town backpacker vibe is very much present. Cheap accommodations, cheap food, plenty of Bintang, and friendly locals give this place an atmosphere that might be similar to Kuta, Bali 20 years ago.

What Kuta You Do?

Where Kuta You Stay?

As mentioned above, guesthouses are everywhere. The prices range anywhere from 125,000rp ($10USD) to 250,000rp depending on if you need air-conditions or are comfortable settling with just a fan. Almost all the accommodations come with Wi-Fi, towels, and a complimentary breakfast. We hoped to have stayed at the Hey Hey Homestay, a very cool little spot with five bungalows that face the ocean – one in particular is raised and gives you a constant sea breeze and features a patio with the obligatory hammock.

We opted one night for Kuta Bay, just south of the main junction this spot featured individual bamboo huts and was the right price. The other nights we stayed at Lamancha Homestay, a small little place with a friendly atmosphere, clean spacious rooms, cold water, and a tasty breakfast, all for 125,000rp.

What Not To Do

Although we haven’t had even the slightest problem with scams or confrontation of any kind, the roads west and east of Kuta that take you to the main surf spots are known to be dangerous in the midnight hours and reports of muggings have begun to increase.

Overall, Kuta, Lombok is one of those places in Indonesia where you could easily extend you 30-day visa, book a room for a month, and immerse yourself in the vibrant community of locals, vagabonds, and surfers alike – and come back year after year.