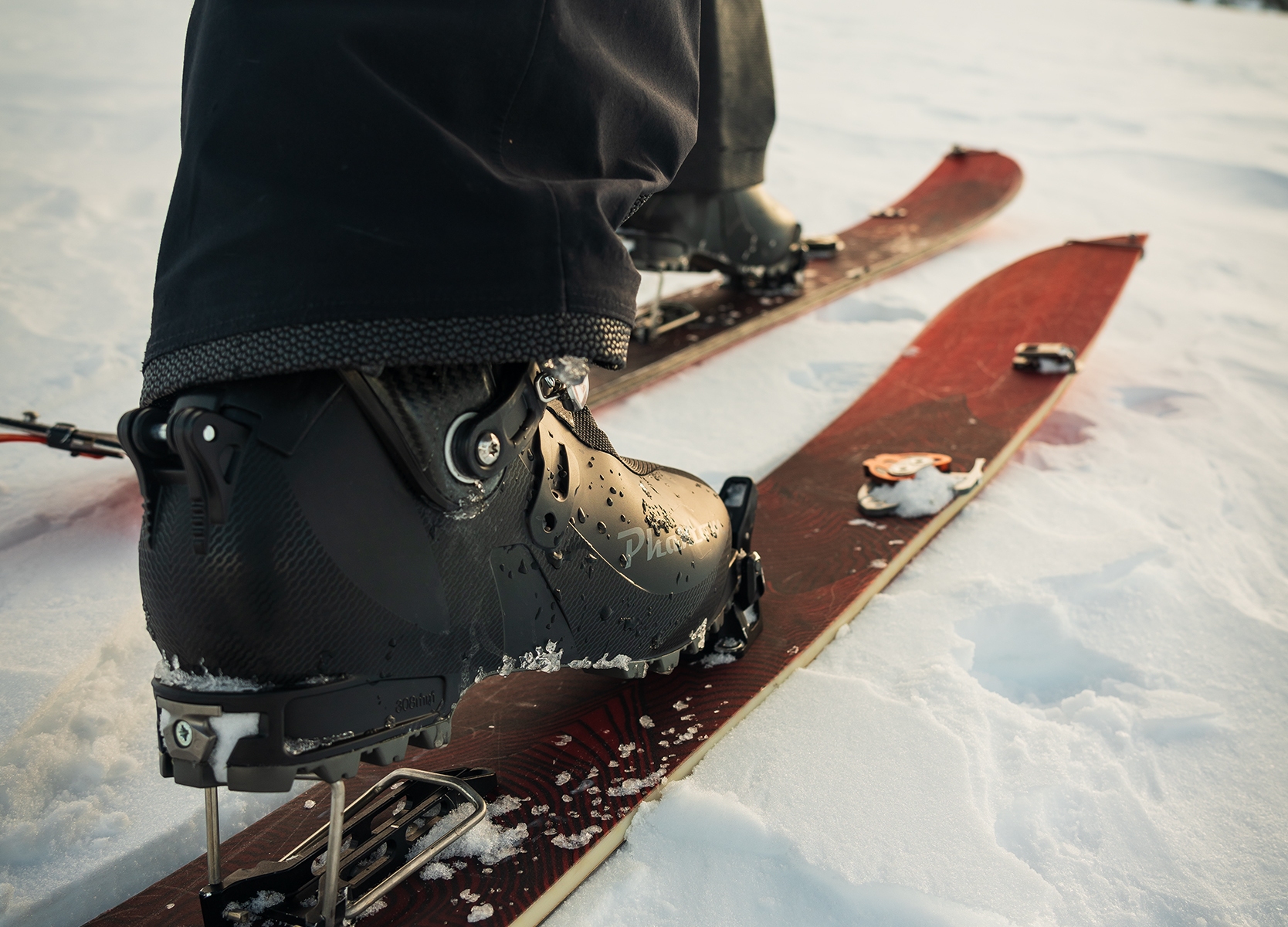 **Note: I do not work for Phantom or receive any gear or payment for this review

As soon as you get a first glimpse of the Phantom Slippers it’s going to turn heads. They just look slick, and they ride even better. Phantom Industries have been such a huge innovator in the splitboarding realm and it’s really great to see them produce not just their first boot, but the first ever splitboard-specifc hardboot – SO RAD! These boots strike a really nice balance between a stiff, supportive hardboot sole, and a pliable and flexible upper cuff that gives it a really cruisey riding feel. They’re incredible light (it will surprise you!), and pretty comfy out of the box, but once you heat mold the entire shell, oh boy, get ready! Slippers are an apt name for these bad boys.

I joined in on the initial pre-order of these boots in August, so clearly I was excited to get my hands on them. Previously, I’d be riding Dynafit TLT6’s with the only mod being to shave down the rear forward learn plate. I took the Slippers out of the box and tossed them on my feet and knew right away that these were going to fit like a glove once molded. They’re incredible simple boots, two buckles, and a link lever – in my experience simplicity in the backcountry is what you’re looking for.

I took them up to my local hill (Revelstoke Mountain Resort) to dial in my fit. I had the gold link levers (Medium) installed originally (I’m about 6’ and 175lbs) and I was really surprised by how soft they felt. Like, definitely softer than my old softboots (Burton Tourists). They felt really cruisy and I could press butters and lay down carves with ease, however, part of the reason I love hardboots is their stiffness – so back home I went. I installed the green (stiffest) link lever, and this was definitely a marked improvement in my opinion.

**Overall I find these boots to be too soft. This is a personal preference as I know others who ride them with the red spring that weigh more than me. However, adding a stiffer liner (Such as the Intuition Pro Wrap, Pro Tour, or Tour Wrap) would like help to stiffen the upper.

It provided a nice progressive forward lean that I didn’t feel folded over easily. It is important to note that the Phantom team was looking to design a softer, cruisey hardboot that had the soul of a softboot – that’s exactly what they have here.

On the skintrack it was everything you’ve come to expect from a hardboot. Great energy transfer, good lateral stiffness if there’s some sketchy side hilling (I tighten the upper buckle for this), and they’re very light on your feet. I personally would strap my upper cuff up just a hair and keep the lower buckle loosened until the ride down or a bootpack.

I haven’t had any foot issues (and I have a previous Haglunds Deformity), blisters or hot spots to report. In terms of wear on the boots themselves, I have noticed some rubbing against the gaiter, which I could see slowly becoming a tear potentially.

After about 2 months of use on the Phantom Slippers I can say I’m definitely a fan. They’re cruisy, they feel great in walk mode and overall, I’m not thinking about my feet while I’m in the backcountry. They’ve taken me down 54-degree couloirs, and through mellow open trees with ease. After riding them in all types of terrain, I’ve personally, I found them to be a little on the softer side for my liking, however, that’s more of a style preference than a critique! The lateral flex is clearly a huge plus, dropping cliffs and nose pressing in the deep stuff is a breeze, I truly don’t really remember how my soft boots differed.

It’s no joke, these boots are friggin’ comfortable. I haven’t had a hot spot, a blister, arch pain, nothing. I literally look forward to sliding my feet into them in the morning.

True story: In an effort to save on space and efficiency I honestly wear these in the car on the way to Rogers Pass… I’ll even drive with them. The range of motion is so good, it’s honestly no different than my Mucks.

These boots quickly got some pretty serious testing. Steep bootpacks with plenty of rocky quartzite hiding underneath the surface – and they’re holding up well. The rubber sole is grippy, and on technical terrain I feel a lot more confident with these on my feet. However, as always the trade-off for good grip could be overall durability of the rubber – but so far, so good.

The one durability issue for sure is the fact that the gaiter on these boots sit just below the lower buckle. When in ride mode the forward lean is enough to push against the top of the gaiter, causing a very slight rub. Over time this has worn down the top around the rivet points on the boot and caused a small tear. Personally, I just put a couple pieces of black gorilla tape over the top which seems to have solved the problem. Another point of note is that since the gaiter is low, it’s quite easy for snow to get in the liner if they’re not buckled – a small point, but worth mentioning.

**Note: Phantom has since released a thermal-molded cover for the strap to prevent this problem

The other potential issue is that the buckles feature a small tac-weld that had the potential to fail. Phantom has again noticed this themselves and said the solution is the simple flip the buckle over… so that that weld isn’t consistently being pulled on.

The features of this boot are probably obvious to most. There’s this rad thing called a “Link Lever” that comes pre-installed. This lever is the bees-knees, the cats-pajamas, the fox’s socks. Not only does it allow you to adjust and dial in your exact forward and rear lean, but it also provides a really progressing flex. There’s 3 springs to choose from (red-soft, gold-medium, green-stiff) so you can choose what works best with your riding style. Otherwise, as stated above they’re quite simple. Lower buckle to lock in the heel, upper buckle to secure the cuff, drop the link lever and away you go.

Check out this article by WildSnow to learn more:

Since you can heat-mold the shell and liner, they’re going to conform to your feet. From a support perspective the one point of note is that they are so flexible you can move your feet around in them quite easily when unbuckled (which for me is my walking style). This hasn’t caused me any issues or concerns, but unlike the Boa system on the Atomic Backlands, your feet are pretty free to twist and turn in there.

Personally, this is full marks for me. I’m a size 11-11.5 Mens shoe (EUR 45 in climbing shoes) and I wear the 28/28.5 with ease. They fit me snug, and the sole length is quite minimalized for the foot size – meaning the TLT6’s I wore of the same size were actually longer. When you’re a dude with big feet and toe and heel drag are a concern, this minimized overall length is quite critical!

I felt they’re pretty accurate in their standard sizing.

For some, hardbooting represents a concession from the snowboard community.

There’s an old guard that aligns itself with the notion that ski boots = black toenails, cold feet, and general discomfort.

That ski boots are for those other folk, those straight-edge squares that ride on two planks and hold onto poles while they descend. There’s a prevailing ideas that softboots are somehow inherent to the ideal of snowboarding, and that those that cross-over to that darkside of hardboots are to be left at sea… Pirates code.

Yes, powder skis got their roots from snowboard influence – so, maybe it’s time we took a little influence from the skiing community. Hardboots are only going to grow in popularity, their uphill efficiency and long-term durability have always been their advantage. They’ve been a favorite among die-hard backcountry enthusiasts and guides for many years. And now, with the Phantom Slippers I see an entry-point for the everyday rider. 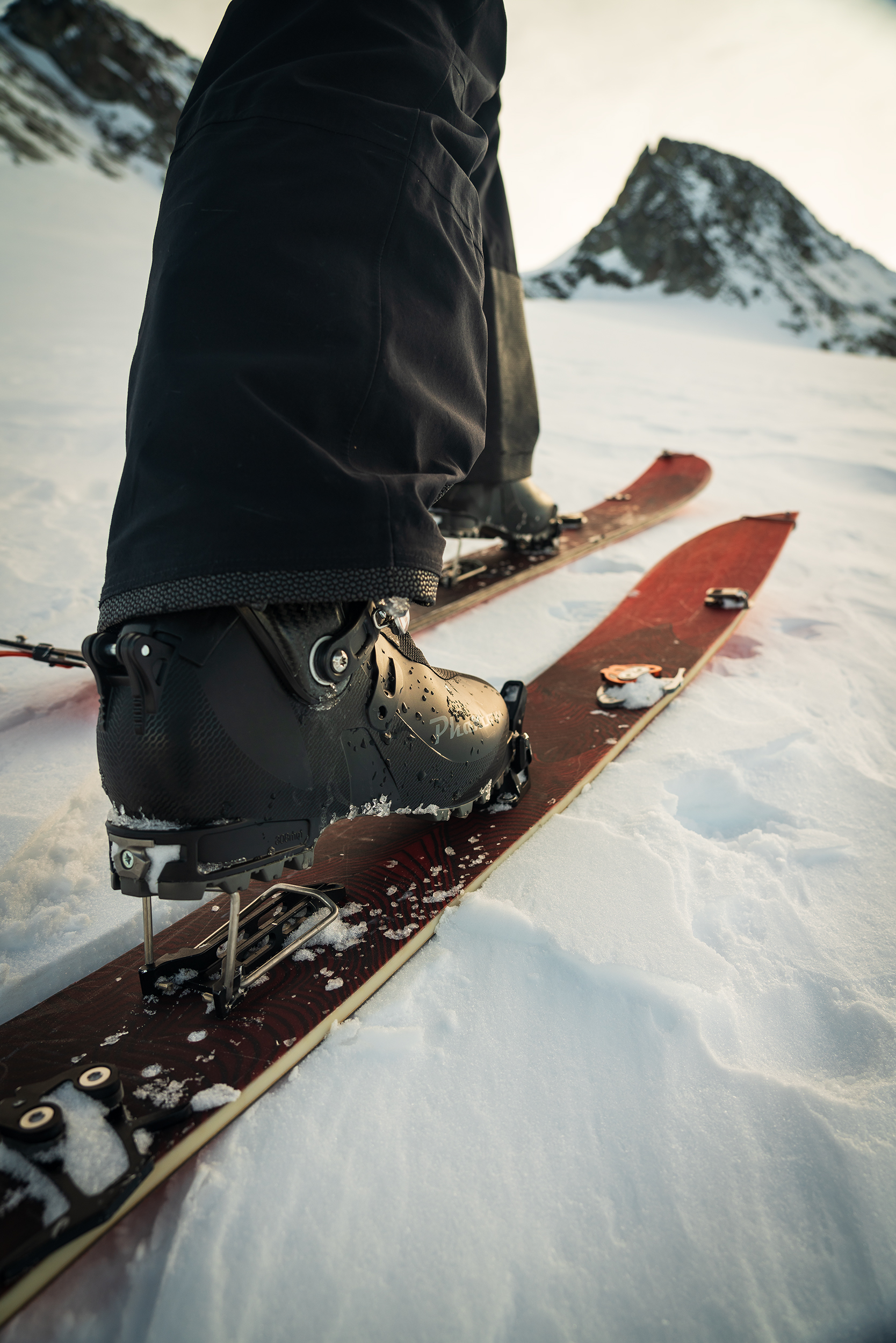