Unprepared, Unplanned, and Weather Permitting – How When Nothing works, Everything Works Out

Unprepared, Unplanned, and Weather Permitting – How When Nothing Works, Everything Works Out

When you’re out and about on the road traveling you’re constantly faced with unknown circumstances, unfamiliar regions, and typically this leads to a great story of being unprepared and learning along the way. However, it’s rare that these occurrences can happen at home, surrounded by so many recognizable comforts and living in a culture that is built on preparation you more often than not know exactly what you’re getting into.

The weekend began on a beautiful Saturday morning. The 9am wake up allowed for a minor sleep-in off of the regular schedule, and we hit the road south from Sudbury to reach Owen Sound 4 hours later. The plan was to hit the blues festival to see the likes of the Glorious Sons, Yukon Blonde, The Sheepdogs, and our main attraction, the Bahamas. After this we would drive up the Bruce Peninsula to Lion’s Head for a heavy 3 days of rappelled climbing, camping, and good times all around.

Saturday flew by without a hitch, the sun stayed high in the sky, we found a campsite right across the road from the venue and saw at least a couple of the bands we’d come to see. Unfortunately, I’d made the mistake of not putting the fly on my tent, so at 3am when it decided to downpour it rained directly on top of me… my reaction? To curl myself in a taco like shell with the tarp on the inside of my tent. Needless to say this lead to me sleeping in the car for the remainder of the night and when we awoke Sunday morning I was definitely a little groggy. 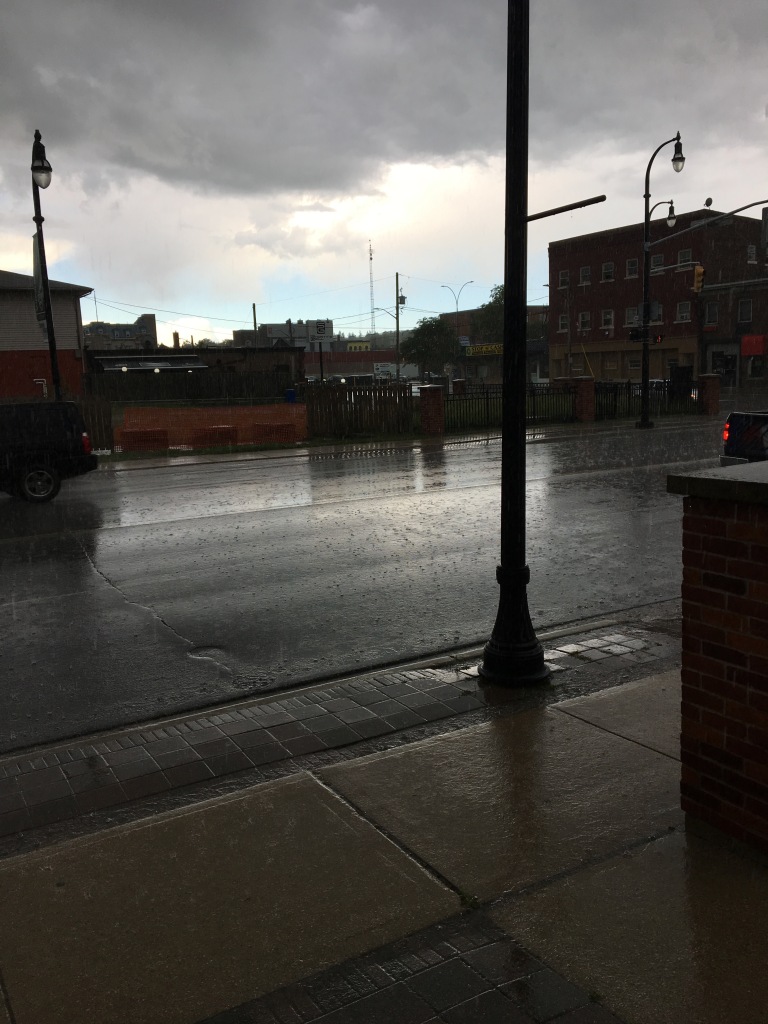 We drove a classic greasy spoon breakfast into us and 3 of us got ready to head north once again and explore the coveted climbing area of Lion’s Head. Now, we all work as Wildland Fire Fighters, so camping is typically something that involves no one else around kind of thing. When we pulled in to see the ‘drive-up’ campsites we weren’t too impressed. We knew the Bruce Trail followed along this neck of the woods and as it turned out, 6km down the trail was a backcountry site designated for those on the trail… and soon we decided, us as well. However, I’d checked out the Grotto near Tobermory as a kid and been raving about it to the guys so we decided we’d spend the day swimming in the caves and tunnels there and let the rock dry out a bit more.

So after driving an hour there we pulled up the the park gate to pay admission and were told, “Unfortunately the parking lot is full at the moment, you’re welcome to come back for the 5pm slot”. WHAT?! This is a provincial park, protecting a natural site and there are so many people that you pay for your parking in timed slots? This seemed just insane. So we turned around and headed back to Lion’s Head, slightly defeated.

Sticking to the original plan we parked at the Bruce Trail and began looking at our backcountry supplies. Two backpacks, Ben had a duffel bag, two massive bags of groceries including fruit, full jars of peanut butter and jam, and generally just things that you would NEVER pack backcountry. Perfect. With a sweater slung over his shoulders as protection from the thing duffel bag straps we were ready for the hour and a half-ish hike that was about to commence.

Laughably, we made our way along the trail and reached our campsite. We set up, collected wood, and were about to start a fire when the rain hit. So, we all crawled into one tent and played a few games. Neglecting unfortunately the freshly collected wood and loaded fire pit that was all too dry. We emerged a couple hours later to find everything drenched. I used our only tarp (a ground pad for my tent) to cover the food, which didn’t actually need to be covered and left our fire food to feel to full brunt of the rain. The next 30 minutes was a simply just a struggle to get anything lit, from birch bark to cedar shavings, to the cardboard casings of the food we’d brought. Nothing seemed to be working. However, we did have a portable stove, which quickly became the pre-drying station. It was simple, built a fire on the stove using propane, then simply transfer said fire into the fire pit and voila, man has made fire. The night quickly slid into our memory banks and we crawled into our sleeping bags. 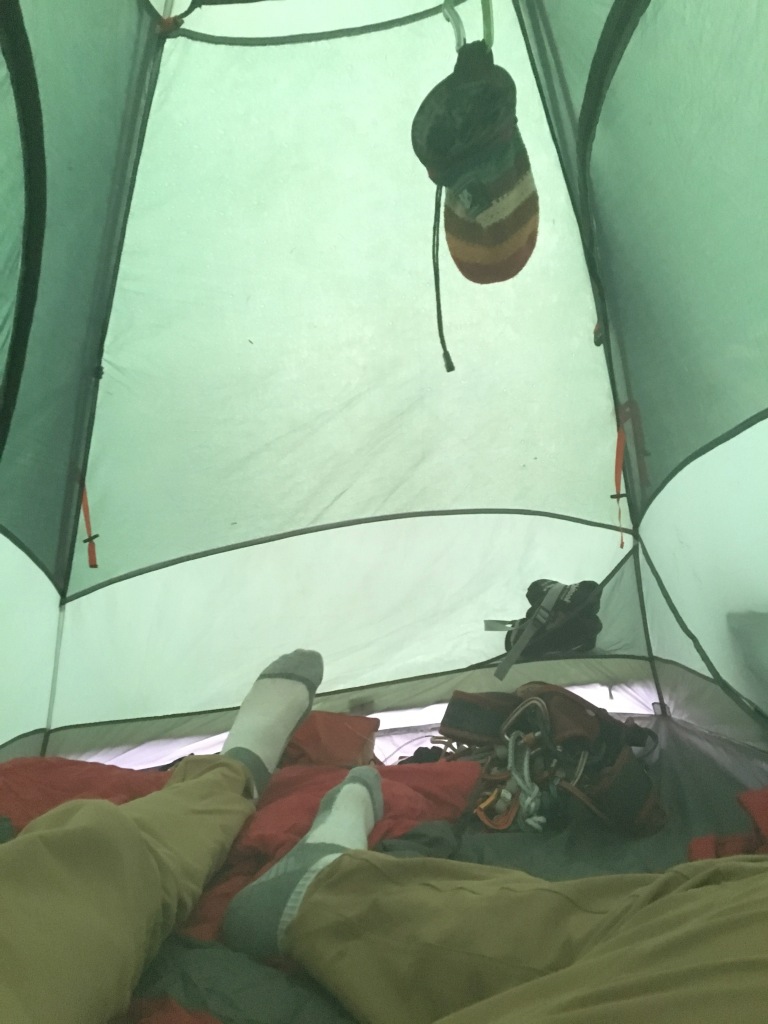 The next say we woke up to sunshine, but knew that clouds were moving in. We threw together our climbing gear and raced off to the edge of the cliff, a short 30-minute hike away. Once there we set up our anchors on the only non-cedar in the area and were just about to lower down over the edge of a 200ft cliff when…. the rain decided to say hello. Now you can climb most things with a little moisture, but limestone is not one of them. So again, we headed back to camp. Now it was already Monday, we hadn’t climbed anything, we’d been rained on a few times, and we never checked out The Grotto, so our one buddy decided he would take his leave and get a pickup from his girlfriend. “No worries”, thought I, this gave us an opportunity to book the ferry from Tobermory to Manatoulin, and thus save 4 hours of driving and give us a sunset cruise. We waved farewell and set about the rest of our fairly uneventful day. 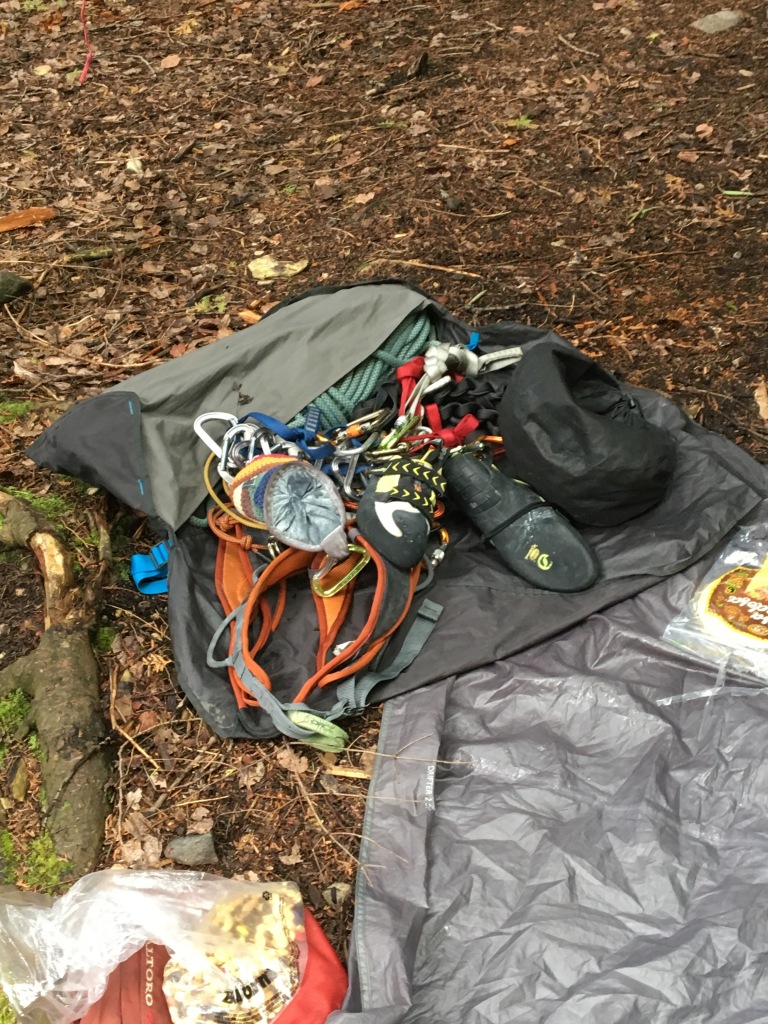 Finally, we awoke Tuesday morning with signs of promise. Blue skies and a high ceiling meant strong likelihood of no rain. We packed up our entire camp, loaded the climbing gear and again set back for the cliff. This time we knew the rain wouldn’t deter us. Since the popular we’d anchored off of wasn’t at the edge of the cliff we used all the webbing we could to built an anchor close-by, but we couldn’t get it right over the edge. No worries again. I was first. I set up my rappel with a safety knot and all and set off over the edge and down 100ft to the hanging anchor 150ft from the ground floor.

Ben soon followed me down and there we both were, suspended on the rock with a gorgeous view of Georgian Bay.

All that was left to do was pull the rope and climb up the bolted sport route (a 4-star 5.10a). I grabbed the right stand and gave it a tug… nothing. I then yanked it… again, nothing. With all my body weight this time… and nothing. The rope was pinched. This means a few things. 1. You can’t pull the rope to rappel any further to safety 2. Your can’t climb up the rope on lead or top-rope to climb the rope 3. You’re stuck. So our very first time climbing at Lion’s Head we pinched the rope on our first route. On a hanging belay that neither of us had ever been on, after 2-days of constant rain. It was a laughable situation. Luckily, our buddy had leant us his ascender (which we’d never used before), and that coupled with a couple tension knots and a locked-out ATC and I was climbing my 9.8mm rope up to safety.

After some trail & error I finally got my Ascender rig set up!

It didn’t start pretty but it was workable and in the end we both were safely back on top of the cliff.

The experience has spent a lot of adrenaline and we were wiped. So we vowed to come back and conquer this beast, but for the time being we left.

Back at the vehicle we had a solid laugh and decided that we would check out The Grotto and chill out before our sunset ferry ride. After driving again a full hour I decided to check my voicemail… the words “cancelled” rang out along the inside of my eardrums. Not only that, but it was too late to check out the Grotto.

SO! We camped backcountry with the no backcountry gear (including just our runners, no rain jacket or any jacket), we didn’t climb for 2 days and when we did we got stuck 150ft above the ground and had to climb the rope to safety, we didn’t get to swim and see the Grotto, AND our ferry was cancelled after we’d driven all the way up meaning the way home was a 6-hour affair. There really wasn’t anything at all that went right.

But in hindsight, it was one of the most laughable, and unplanned adventures I’ve had in a little while. As long as everyone is safe, a few unexpected curves in the road make for the most memorable and in some ways enjoyable experiences.

← Of Volcanoes and Midnight Ascents
Climbing where you’d least expect it – Sudbury, ON →

2 Comments on “Unprepared, Unplanned, and Weather Permitting – How When Nothing works, Everything Works Out”