The Road to Development 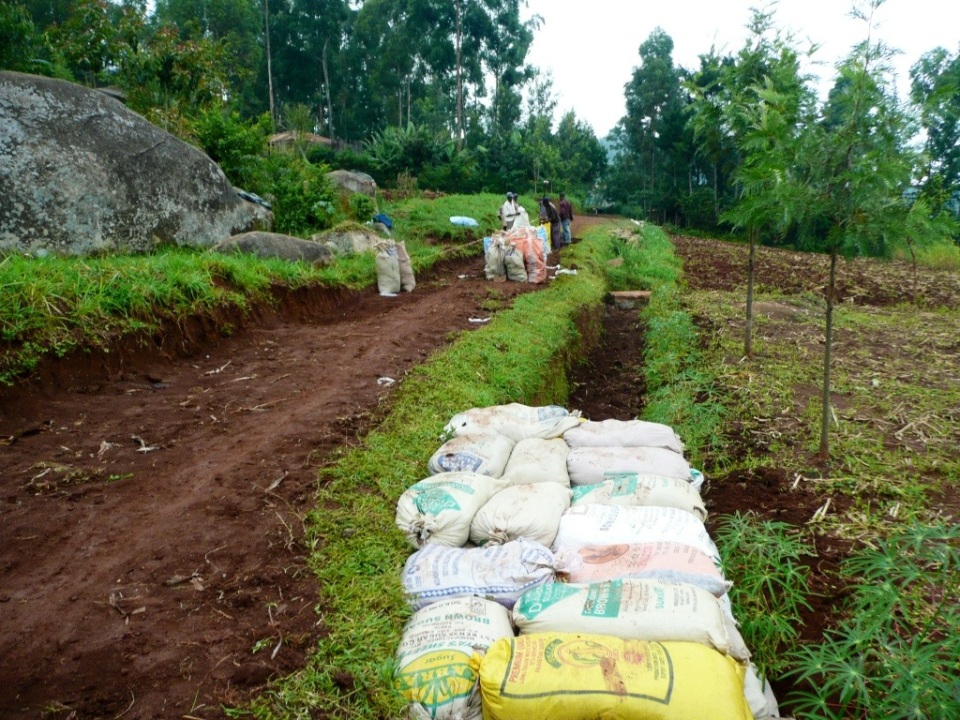 When I first visited the small area of Kiritu in Western Kenya in May of 2012 I was amazed at how beautiful the area was. The village encompasses a large area and each homestead has their own plot of land that is used for maize, black tea, banana trees, avocado, corn, and a few other crops. Most people have a couple cows and maybe a few chickens running around. Basically everyone was living under a subsistence system, you either ate what you were growing, or you sold it to afford yourself something else to eat. The whole village is just west of the Rift Valley and is built upon large hills that can look out to great distances. I was lucky enough to stay with a man named Zak Atinga. Zak had proposed a road project for our group to help assist him with. His general idea is “no road, no development”. Essentially the road allows vehicles to pass, it allows some of the shop owners in the hill to attract more business, it connects ‘Muhalia’ hill to much of the surrounding area, it allows Zak to not need to wheelbarrow his sick grandma down the hill, and the most important aspect, it allows a lorry carrying electrical posts to drive up the hill and extend the electrical lines from the main road. It’s a simple thought process really, build a road, the government provides electrical posts, the area gets electricity and vehicle access, and it showily brings a small community to a higher standard of living.

I’ve now come back to this community about a year later and the 3/4 completed road still amazes me. Essentially 5-6 workers roll massive boulders out from the surrounding forest, smash them to smaller pieces with sledge hammers and lay them in any ditches or extend the width of the road. While this is happening, a small blasting crew blows up any rock blocking the road that appears to be the tip of the iceberg. However, what has always caused me to stop and contemplate this project we’ve been helping with and objectively how valuable it really is.

On one hand I see a small hillside community who is living with no electricity and has to walk great distances to reach a clinic, market, or any other necessity. A community that could use the road to prosper its own markets, a community that could ‘hook into’ the electrical network and provide power and light in the pitch black darkness that is after 7pm here.

However, on the other hand, when I stay with someone like Zak on his beautiful hilltop property I can’t help but question my own projects. Zak has tea fields, maize crops, 3 cows and 1 bull, and plenty of chickens running around. The grass doesn’t need to be cut because the cows naturally graze and fertilize it. He receives eggs a few times a week from his chickens. Most of his crops he sells or makes Ugali with. He is in no danger of little to no access to food and his shelter is a mud and concrete mix. When you spend a night there, around 6:45pm the kerosene lamp comes out and a complete darkness covers the hill with no sign of light pollution. No ones crowds a TV at night, usually a chat with a pot of chai tea suffices, and if not there is always the radio to listen to. Most people are asleep by about 8 or 9pm. I ask Zak why he wants electricity, and his biggest reason is “So that I can have a microwave”. This caught me off guard, a microwave? Is that really going to benefit you? I wanted to say that was ridiculous, why a microwave? You make your own charcoal, firewood isn’t a problem, the food will probably taste better! But who am I to deny this man a microwave, I have one in my house, I always have, so why shouldn’t he?

These questions cause me to pause and wonder if this community that has stable shelters, plenty of crop, and a complete subsistence system really needs electricity? Something that might detract from the great system in place currently. Sure access to electricity is considered a basic standard of living, but we fared thousands of years without it. While I agree that practically this village would enjoy having electricity, surely it would ease the burden of daily chores. I just can’t help but wonder if our notion if development is really moving down the right road.

← To all who have read!
Hidden Lakes and Tiny Islands →