Nairobi, the capital city of Kenya, otherwise known as Nairobbery carries certain connotations about it. One being the fact that you have to be vigilant with any of your belongings, especially if you’re a traveller. Travelling from Rwanda to Kenya you notice a few clear distinguishing factors. 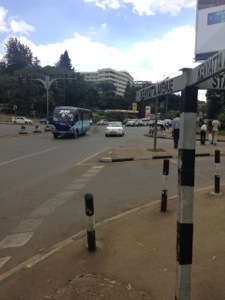 For one, Rwanda’s piki drivers wear a helmet, allow only one passenger, and provide you with your own helmet. Kenya on the other hand crams 3 passengers on the back of the bike, and you get the luxury of the wind in your hair! Another big factor is that the cross walks in Kigali are abided by, and cars tend to stop and allow you to continue on your way. From my previous experience in Nairobi, cars hardly stop for red lights, let alone pedestrian crosswalks. However, maybe it’s just a different perspective, or maybe some change has actually occurred, but for the first time in this bustling city of Nairobi a car stopped for me. At first I was shocked, unsure if I should continue walking or if this was simply a trick, a facade, a cruel joke, but it was none of the above, it was a courtesy stop to allow this pedestrian to cross. And it didn’t just happen once, no, in fact that day I was allowed to cross in front of another car 3 separate times.

Now to most these daily occurrences might not elicit much change. But for me the entire city seemed to lighten up a bit, and my slight reservation for the city of Nairobi was forgotten. Nairobi is an incredibly electric city, with daily markets, packed Mutatu’s, and even a weekend fair! In an attempt to celebrate I went to the fair in Uhuru park and decided to take a ride on the swings.

Seeing them from afar I thought it looked really great because they were about twice the speed of any fair swings I’d ever seen, for better or for worse. So I paid my 100Ksh and sat down. The ride included myself, my co, and two kids about the age of 6, and some other random guy who looked to be over 50. After the most painstaking creaking the ride began to spin, I noticed the speed increasing quite a lot, and then a lot more, and then I was spinning far to quickly to focus on any one point in front of me, I was quickly nauseous. After about 30 seconds I was incredibly ready for this ride to end. Then I heard the engine cut, and the ride began to slow, and I let out a sigh of relief. Then quickly to my surprise the Kenyan kid running the ride said aloud, “one more round!” And again the engine kicked on and we were off again. This time I thought maybe if I could mentally prepare myself for such a ride I could overcome the nausea. But I was wrong. When the ride had finally stopped I stumbled around for about 5 minutes and decided that was celebration enough.

I am in Nairobi, and a car stopped for me.